After having added the PDF support to our Adwords reporting tool, Google Adwords Excel reports are now available in SunnyReports.

How to export to Adwords reports to Excel XLS

As usual, it’s effortless. After having made your report in some seconds, before the recipients’ fields, just tick the box:

The XLS Adwords report will be attached to the email, like this:

END_OF_DOCUMENT_TOKEN_TO_BE_REPLACED 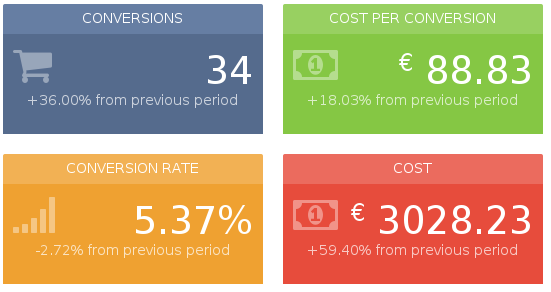 Online advertising is all about results and statistics. That is why reporting is so important. For campaign managers, it helps to take a step back on their daily work. For clients or managers, it’s the only way to understand how performs a campaign and discuss the results.

Reporting is a difficult exercise. Let’s have a look to what matter in a good Adwords report.

The choice of metrics

Metrics are the basis of an Adwords report. There are hundreds in Google Adwords – like clicks, impressions, CTR, conversions, cost per conversion, … – and most of them are used daily by campaigns managers to optimize the campaigns.

END_OF_DOCUMENT_TOKEN_TO_BE_REPLACED

Impression share report is an underrated report. Be wiser than your competitors and use it to find powerful leverages to increase your Adwords campaign performances. 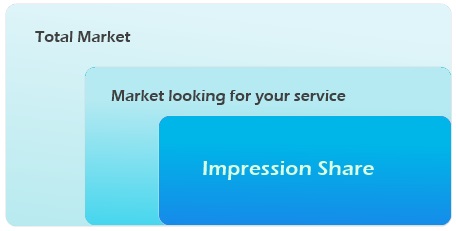 Having a look at the picture above, you can quickly understand how useful this data is:

increase the part of your impression share => more “targeted people” see your ads.

There is four types of Search Impression Share (IS) metrics available for search campaign:

END_OF_DOCUMENT_TOKEN_TO_BE_REPLACED

Google Analytics is going to improve his Google Adwords reporting features by adding a new feature called Treemaps. The information is coming from Google+ “Introducing Treemaps in Google Analytics for Adwords Insight“.

Treemaps will offer to Adwords campaign managers a better insight of the performances of their ads. The approach is not to only have look to numbers but to visually identify the trends or troubles.

It’s done by displaying hierarchical data using nested rectangles, showing positive results in green, lagging results in red. It aims to speed the decision process and to optimize better and quicker the campaigns.

It’s a really interesting improvement in the ad performances analysis. Treemaps will be available in the next weeks in Google Analytics in Acquisition > Adwords > Treemaps.

SunnyReports allows now to add comparison metrics in your Adwords reports. Back on compare date ranges feature, a great way to make a deep analysis in your daily work as an Adwords campaign manager.

What is “compare periods” feature in Adwords?

Within Adwords, you can easily select the period for which you want data. But it’s interesting to be able to monitor the evolution of these data. To do that, you can compare the selected period to another one. Adwords proposes you three different possibilities.

With this option, you can compare the selected period with the immediately previous one.

If you select “Current month”, you have to take care that Google Adwords can compare two periods which have not the same number of days. Indeed, if you are the August, 11, “Current month” corresponds from the August, 1 to August, 11. But if you compare with “previous period”, it will be compared to Juy, 1 to July, 31.

With this option, the compared period will be the same exact period a year before.

There is an exception here: february. February is a special month. During leap year, February counts 29 days instead of 28 the other year. Adwords takes care of it.

Select the secondary period you want precisely. That’s it.

Adwords is sometimes complicated with plenty of menus, options, features, … But not with the “compare date ranges” feature. Everything is done in one click.

No matter on which view you are. Just click in the period select field. At the bottom, you will see a “COMPARE” label with a trigger. Push the trigger and the three periods options will appear.

1. Select the one you want and apply.

2. The period select field now show you are comparing two periods, and calculate the dates of the compared one.

3. In the datatable, you have now a “+” sign above each head column titles.

Click on each “+” sign to show the data for the secondary period. For the selected KPIs,  you will have: